The Kenwood Brotherhood, Inc. is a member of Mentor Illinois. 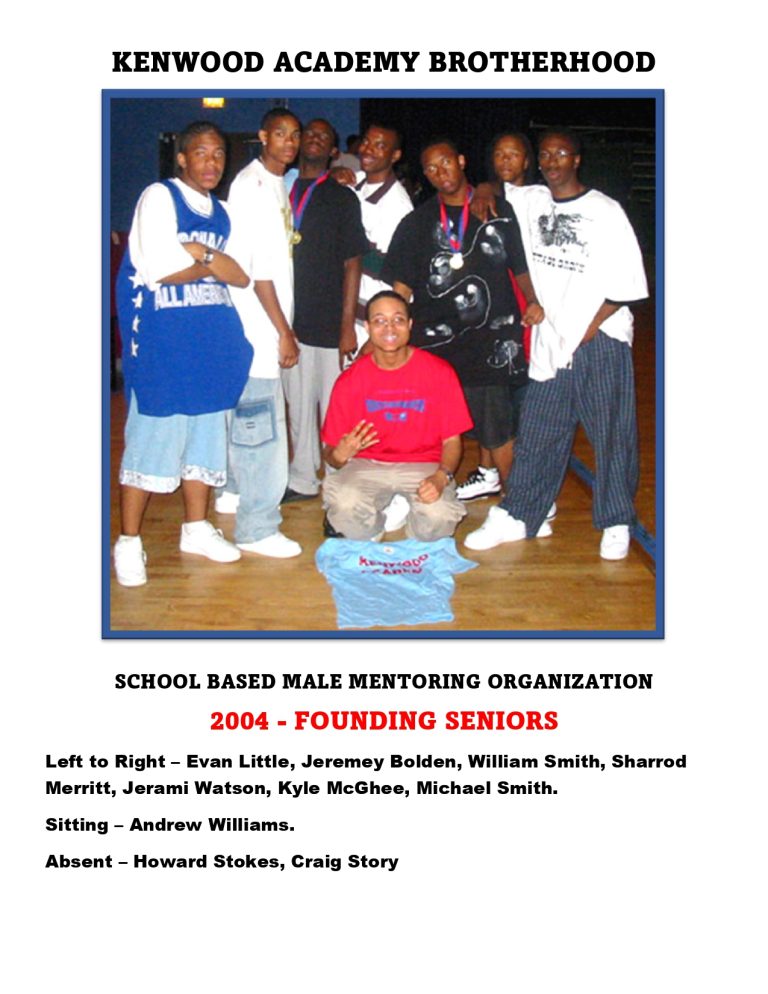 The purpose of this project is to train adolescent males of Kenwood Academy to become leaders for themselves, their families, their communities, and school. The program will consist of activities that will foster academic excellence, emotional maturity, communal responsibility, and career exploration. The activities will consist of open forums, tutoring, homework/ class work assistance, college visits, computer exploration, public speaking, and creative expressions through poetry, rap, and short stories. To establish an effective relationship, the activities also include sports, games, and watching appropriate video movies.

Membership into The Brotherhood is open for any male that would like to improve himself. Members are required to accept our Creed FRATERNITY, RESPONSIBILITY, and CREATIVITY. Members must also pass all seven of their classes in order to attend the field trips. Members are also expected to not have any disciplinary referrals.

The Kenwood Brotherhood meets bi-weekly, Wednesday during Advisory and Friday after school in the Dr. Martin Luther King Room. The Friday meetings start at 4:20 p.m. Members that miss more than 2 consecutive meetings will receive a notice of non-attendance. On the third absence they will be placed on an IN-ACTIVE list.

The Brotherhood of Kenwood Academy would to extend a special thank you to the following individuals and groups:

Mr. Anthony Downing and the men of Iota Phi Theta Fraternity, Inc. for leading our major fundraiser. It is the Step Show which is held each December.

Mrs. Denise Knox -Kenwood Librarian: She is one of our biggest moral supporters. She helped save our 2011 Freedom College Tour to Washington, DC by helping contact Georgetown University, George Washington University, and Howard University. Her daughter Alleson was the contact person and did the legwork to get things moving.

Brotherhood Alumni Foundation: The “Foundation” is made up of Brotherhood graduates from 2004-2012. The Foundation checks on us throughout the year by coming to the school. They raised $2000 in 2011 which was given as college scholarships to Undra Ware (1st Place), Pierre Anderson (2nd Place), Joseph Laseter (3rd Place).

Dr. Joyce Brown, the former Kenwood Counseling Department chairperson, for her untiring support and empowerment of children of all ages. She recognized the need for a male mentoring/leadership program at Kenwood Academy and pushed for it’s birth and development.

Mr. Arthur Slater, Former Principal of Kenwood for giving the approval for our new organization to exist. He have proven very supportive of the idea of teaching males to be leaders of themselves, their families, within their community and at Kenwood Academy.

Ms Veniece Bradley, Postsecondary education coach for suggesting and funding our 1st Annual Male Leadership Retreat at Northern Illinois University in May, 2004. She organized a retreat that introduced The Brotherhood of Kenwood Academy to the process of securing a post secondary education. The Annual Retreat is held each year at a college in the Chicagoland area.

Ms. Debra Reed, Kenwood Academy Professional School Counselor, She always believed in us. She is quoted as saying the Brotherhood has “spiritual” connotations. She always supported us and our endeavors. She traveled with us to Long Beach, California to teach the Long Beach School District to create a school based male mentoring organization. She retired in 2010 but continuously checks in on our progress.

Ms. Lynda Parker, Kenwood Academy Professional School Counselor/Department Chairperson, She is quoted as saying, “always let the children make decisions for themselves”. She also supported us 100%. She traveled with us our of the city of Chicago to make presentations about the Brotherhood. She traveled with us to Long Beach, California and New Orleans, Louisiana.